I’ve heard some people say they don’t like broccoli because of the way it smells when they boil it. I say don’t boil it at all! A quick sauté in a saucepan is going to give you bright, crisp-tender broccoli that will be far more appetizing than any boiled broccoli mush you’ve eaten in the past.

If you aren’t crazy about how a vegetable (or anything) smells when you are cooking it, one of the best ways to combat it is to cook it with things that smell wonderful. I’ve combined my broccoli with garlic and sesame, both of which smell absolutely divine. Toss in a little crushed red pepper and a splash of soy sauce and you are good to go.

I would put this on a bowl of rice or noodles and call it dinner, but feel free to toss some shrimp, chicken or tofu with it, or just serve it as a veggie side for your favorite main dish.

It’s that time of year again when salad becomes an every other night menu item in my house. This is partially due to the no air conditioning equals minimal cooking policy. And partly because I’m trying to fit into my summer clothes from last year.

In any case, salad doesn’t have to be boring. This one has an easy, bright vinaigrette, fresh fruit and yummy roasted polenta rounds to go with it.

The first time I bought polenta in a tube I was leery to say the least. It’s weird. It doesn’t look appetizing. And good food usually doesn’t come in a tube of any kind. BUT. Polenta is one of those weird foods that you cook and then as it cools it will form whatever shape you happen to put it in. The tubes of polenta generally are minimally processed with no extra ingredients. It’s such a wonderful convenience, especially if you are wanting to fry it up like this. Simply take it out of the tube, slice it up and bake it (or you can pan fry it instead). It’s delicious and soooo easy.

To easily get the seeds out of your pomegranate, score around the center (don’t cut all the way through), pull the two halves apart, turn one half over in your palm and beat on it with a wooden spoon. In about 10-15 seconds, you will have a bowl full of pomegranate seeds. Try not to hit your hand with the spoon. For you visual types, check out this video if you don’t believe me or need to see it before attempting. If you like pomegranates, this will change your life. Seriously.

Preheat oven to 400˚. Slice polenta in rounds about 1/4 inch thick and spread out on a cookie sheet. Very lightly drizzle with olive oil and sprinkle with salt & pepper. Bake 20-30 minutes until a lightly browned and a bit crispy on the edges. They will still be tender and chewy in the middle.

Polenta “croutons”, disks, rounds…whatever you call them, they are crispy, chewy, wonderful good!

In a small bowl whisk together dijon, vinegar, salt and pepper. While continuing to whisk, add olive oil very slowly, just a tiny drizzle. Stir in basil, taste and adjust seasonings if needed. 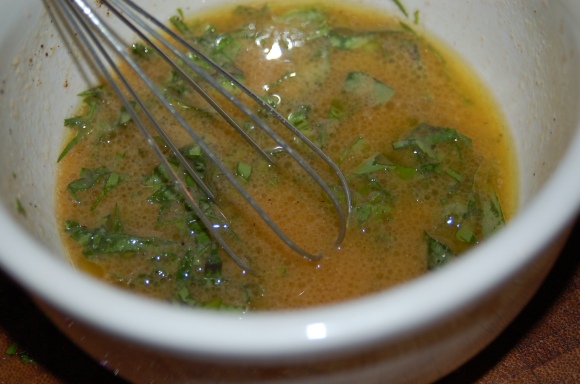 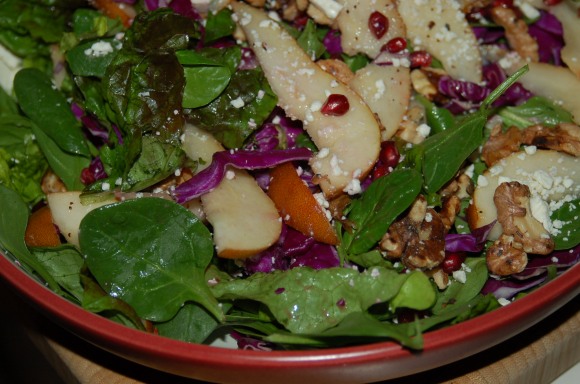 If you’re going to eat salad, why not eat this one?

Any meal that is centered around potatoes is going to be a winner in my book. There is no better way to get me to eat a whole bunch of spinach than to pile some wonderful potatoes on top of it.

I’ve been known to make this particular meal for breakfast, lunch or dinner (sometimes more than once in a day if I have leftovers). Not only that but the potatoes used in this regularly show up as a side dish for dinner or breakfast as well.  Now that summer is approaching, I already have one pot of basil growing with more to join it soon, which means pesto in my fridge ALL SUMMER LONG!

If you have your favorite pesto recipe or store brand, feel free to use that. For my fresh basil pesto, click here. Or for something slightly different, try my recipe for hazelnut pesto. 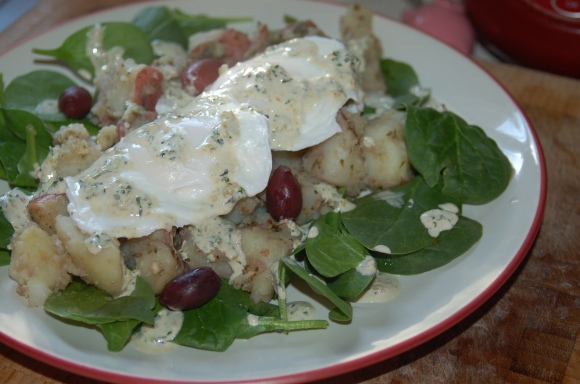 For sauce:
1 tbsp. mayonnaise (or olive oil if you don’t like it creamy)
2 tsp. red wine vinegar
1 tsp. pesto

Bring a pot of water to a boil. Add potatoes and cook about 10 minutes until fork tender (but not mushy). Drain potatoes. In a bowl, whisk together 2-3 tbsp. pesto, 2 tbsp. olive oil, 2 tbsp. red wine vinegar and a pinch of salt & pepper. Add potatoes and toss to coat. 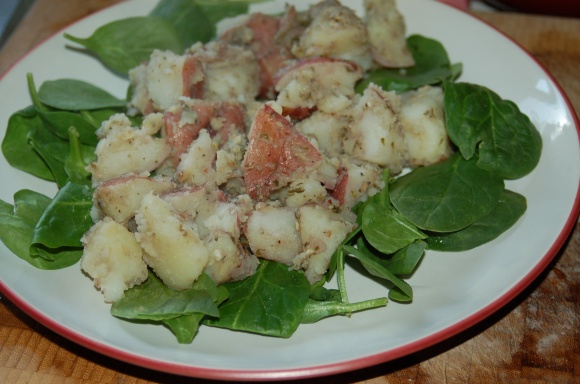 Bring a small pan of water with 1/2 tsp. of vinegar to a boil. Gently break eggs into the pan (1-2 per person). Turn heat down to simmer. Cook 3 minutes until whites are set. Remove with a slotted spoon and lay on top of potatoes.

Perfectly poached eggs on top. If you prefer your eggs a different way, do your own thing here.

Mix together sauce ingredients in a small bowl. Scatter a few olives on top of the eggs & potatoes. Drizzle everything with sauce, add a grind or two of fresh pepper and eat!

The star of this dish – for me – was the ricotta topping. It’s hard to feel like you are missing out when you are eating something so rich and creamy. And here’s the kicker. My daughter ate SQUASH and it was all because she loved the ricotta stuff so much. I gave her a tiny spoonful of this dish (I have a rule that you have to at least try everything once) and told her if she hated it she could make herself a sandwich. Normally she hates squash, so this is how I was expecting it to go down. But instead she went back, loaded up her bowl and ate it all. It was some sort of squashy miracle.

One note on cooking the squash: some people cook it whole, some cut it in half. It will cook faster if you cut it in half (in about 45 minutes or so), but wrestling these things into submission when they are raw is not always easy. I found it much easier to break this sucker down when it was cooked and tender, so I left mine whole.

Preheat oven to 400˚. Poke your squash with a fork or knife a few times and place in the oven whole (I put mine on a pan just in case it leaked some juices). Roast for 1 – 1 1/2 hours until tender. Let it cool just a bit so you can handle it. (You can do this the day before or earlier in the day if time is an issue).

Slice it in half, scoop out the seeds in the middle (discard the seeds), and then using a fork, comb through the squash, creating “spaghetti” strands. Place these in the bottom of your baking dish. Drizzle with just a bit of olive oil and sprinkle with a pinch of salt. Toss a bit with your fingers to combine.

In a saucepan, heat 1 tbsp. of olive oil. Add garlic and crushed red pepper.  Cook and stir for a minute. Add tomatoes, salt & pepper, Italian seasoning and wine. Bring to a boil and then turn down to a simmer for 15 minutes. Pour over the top of the squash and spread out so all of the squash is covered. 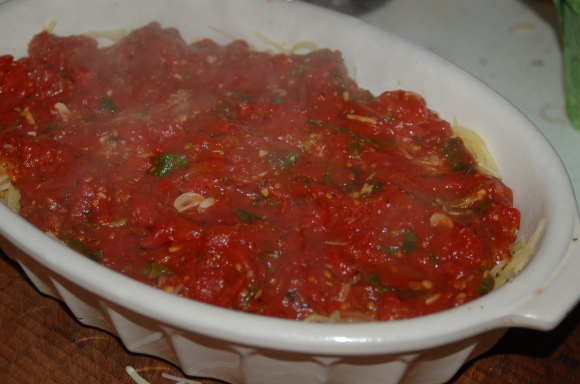 Smother anything in this sauce and it will be good.

In a small bowl, combine ricotta, parmesan and seasonings.  Carefully spread ricotta mixture over the top of the red sauce.