On nights I’m home alone, sometimes it seems like a lot of effort to cook a whole dinner.  But I’m trying to eat less take out and I’ve stopped buying cereal, so lately this has been my go-to solo meal.  I spread a few things out on a cookie sheet and bake or broil it.  No fuss, real food, and best of all, no dishes!

Now don’t get me wrong.  This isn’t only a method that works when you’re cooking for one.  I do this when the kids are home too.  It’s just so easy and versatile.  The possibilities are endless.

Dinner on a Cookie Sheet – Broiled Salmon, Asparagus, and Peppers

Preheat broiler.  Line a cookie sheet with foil.  Spray with cooking spray.  Place salmon on the pan.  Spread out asparagus and peppers in a single layer.  Sprinkle everything with lemon pepper and salt.  Drizzle with olive oil.  Dot peppers with goat cheese. Top salmon and asparagus with lemon slices.

Cut veggies so everything is a similar size for more even cooking.

Broil 7-10 minutes until fish flakes easily and veggies are tender.  While dinner is broiling stir together pesto, mayo and lemon juice for a quickie sauce to top the salmon and asparagus.

Want another option for Dinner on a Cookie Sheet?  Check out Honey Mustard Chicken with Smashed Potatoes and Green Beans!

Getting my kids to enjoy seafood was a challenge.  This recipe (and a few similar ones) were the turning point for them. A cheesy, crunchy topping is something any kid recognizes and loves, no matter what it’s on.  Doesn’t hurt that I love it too.

The mayo may seem like a weird choice, but it keeps the fish moist, the breadcrumbs stick to it beautifully and it’s non-dairy, which was essential when the kids were younger because Luke had a milk allergy.  Even though he doesn’t have that problem now, it works so well I’ve just kept using it.

Preheat oven to 400˚.  In a small bowl mix panko, parmesan, lemon pepper, a pinch of salt & pepper and dill.  Put your fish on a baking pan covered with foil.  Coat surface of fish with mayonnaise.  Pile on the breadcrumb mixture and press into it to make sure it stays put.

Ready to go in the oven.

Drizzle with olive oil.  Bake for 15-20 minutes, until fish flakes easily in the middle. 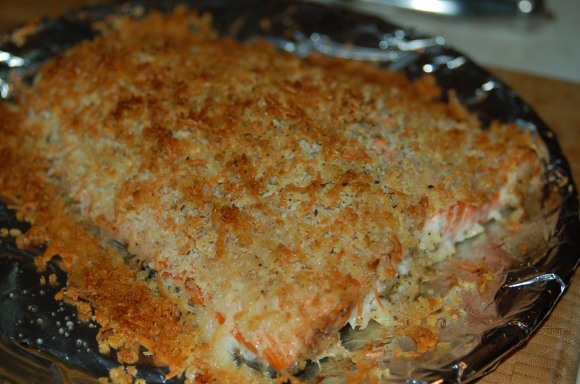 Parmesan-Crusted Salmon, right out of the oven. By the way, the little crispy breadcrumbs that fell off the salmon make great crouton-ish salad crunchies.

My kids are out of town and I was feeling like giving myself a little treat.  So I made myself a fancy dinner, poured a glass of wine and watched R rated shows all evening.  It was lovely.

After cooking this dish, I was so impressed with myself I sent a photo of my plate to a friend and received the reply that it looked like something you’d pay $25 for in a restaurant!  And even better, it tasted like it too.  Simple to prepare, but elegant and oh, so delicious. 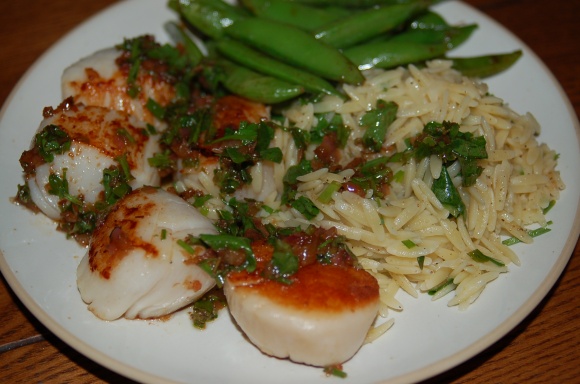 Heat a large skillet over medium-high heat.  Sprinkle scallops with salt & pepper.  Drizzle a bit of olive oil in the skillet, heat for a minute and then add scallops to the pan.  Cook 3 minutes on each side or until browned.  Remove from pan and keep warm.  Combine wine, shallots  and vinegar in a saucepan; bring to a boil. Cook 5 minutes or until liquid is reduced to 1 tbsp.  Reduce heat to low.  Add butter cubes, one at a time, whisking after each addition until butter is fully incorporated.  Stir in remaining herbs and 1/8 tsp. each of salt & pepper.  Drizzle over scallops and orzo.  Serves 4.

On the rare night the kids are gone, and I’m on my own for dinner, it’s tempting to go for the PB&J and just not mess with cooking at all.  But sometimes I like to treat myself and cook something simple that’s just for me.  A pretty plate, happy taste buds, a glass of wine, a good book or something on the TV that the kids aren’t allowed to watch.  It all adds up to a relaxing, peaceful evening, which sometimes is just what the doctor ordered. So I always keep a couple of single servings of fish in the freezer for just such an occasion.

This is one of my favorite salmon recipes.  It’s simple, it’s quick.  Perfect for a single serving, but also easy to multiply if you have more people to feed.  The brown sugar and honey caramelize as they cook under the broiler, creating a sweet candy coating.  To balance the sweetness of the salmon, I like to make something a little spicy on the side.  Tonight it was a quick side of pan-sauteed spicy snap peas, a beautiful contrast.  And it looks pretty, which is just a bonus.  A little fresh pineapple on the side works great to cool things off after you heat them up.

Mix all ingredients and smear all over the surface of the salmon.  Put under the broiler and cook about 10 minutes.  Check occasionally, the fish should flake easily with a fork when done.

As a little girl, Claire did not care much for seafood, but in spite of that, the one thing she always loved was clams.  She would eat them cooked any way, any place.  Her favorite way to eat them was steamed fresh in the shell.  Of course, this is the best way to eat a clam, preferably at the beach!  Her second favorite way to eat them is in pasta.  She told me yesterday that out of all the pasta dishes I make this one is her favorite.

One of the best things about this recipe is that it’s made mostly with pantry items.  I like to make sure I have a few cans of clams and anchovies on hand for emergency clam pasta situations.  You never know when one will occur!  And for those of you who are cringing at the anchovy reference here, I will say that I used to be scared of them too.  They sound nasty.  They smell fishy.  They could very possibly be disgusting.  And maybe if you ate them straight from the can they would be.  But when you cook with them, they sort of dissolve into the sauce, adding a subtle, salty, nutty flavor that is not fishy at all.  It’s a miracle!  And they add a wonderful depth of flavor that you do not get without them.  So trust me, and put them in there!

Cooking for my mom is always a little funny.  She likes what she likes and she doesn’t like to deviate much from it.  She prefers good home cooking, “comfort food”.  Don’t get me wrong, I love that stuff too. But, as an adult, I’ve developed my own tastes, and have taught myself to cook and eat different things than what I grew up eating.  I am pretty adventurous as far as food goes.  But it gets me in trouble from time to time.  Sometimes, when I try appeal to Mom’s adventurous side by making new foods, things go awry.  And yet…I keep doing it. 🙂  She says she likes my cooking, but secretly (or not so secretly) she thinks I’m a little weird.

When I first moved back to town, I made shrimp tacos for Mom.  I’ve made these before.  The kids and I love them.  Of course, we like spicy food.  My mom…not so much.  As my daughter so colorfully put it, I nearly “decapitated her with my spicy awesomeness.”  This was several years ago and my mom still talks about it.

Aside from the heat, these tacos have a great, zippy sauce that doubles as a terrific green salsa for chips.  If you’re not a fan of spicy, ditch the chile pepper and cayenne in this recipe, or reduce the amount.  They definitely have a kick otherwise! 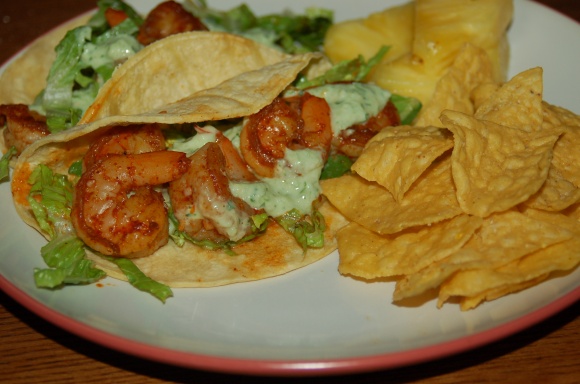 Combine shrimp with chili powder, cayenne, salt & garlic, and let it marinate while you make the salsa.  To prepare the salsa, combine all ingredients in a food processor and puree.  Heat a large skillet over med-high heat, add a tablespoon of olive oil and then add shrimp.  Cook, stirring until shrimp are cooked through.  Build your tacos with shredded lettuce, 4 or 5 shrimp, and sauce.

Five days into Project Veggie, and I was in the mood for a burger.  According to Claire’s rules, we are allowed to have fish once a week, so Thai Tuna Burgers fit the bill.

Like many people who go to college on a very small budget, I ate more than my fair share of canned tuna and Top Ramen.  And like many of those people, I don’t often crave those foods these days.  Tuna out of a can is great in a pinch, and my daughter loves it, but sometimes the smell just makes me queasy.  It was quite a while after my college days that I had an actual piece of tuna in a restaurant for the first time.  It came as a complete surprise that it didn’t taste anything like the tuna I was familiar with.  This recipe uses the real stuff that you buy at the fish counter, not the stuff in the can.  I haven’t tried substituting canned fish in this particular recipe, and frankly, they are so good using the fresh fish that I don’t want to.

I made these once for a group of people who came over for a BBQ.  It was a somewhat odd mix of vegetarians (seafood eating vegetarians, obviously) and “meat and potatoes” types and I didn’t want to make multiples dishes.  Instead I made a whole bunch of these, and they were gobbled up in short order by every single person.  I don’t think most people even knew what was in them.

Last night I made a whole recipe (6 burgers) for the 3 of us, thinking I’d have leftovers for lunch, but no such luck.  We all went back for a second burger and ate every bite.  A simple & spicy cucumber salad was the perfect match for the burgers.

Cut tuna steaks into large chunks and put in food processor.  Pulse on and off until tuna is chopped into small pieces. If you don’t have a food processor, chop the tuna into very small pieces with a sharp knife.  Transfer to a large bowl.  Add all the remaining ingredients.  Mix well. Refrigerate for 15-30 minutes (I admit to skipping this step more often than not, but it does help them set up a little firmer).  Form mixture into 6 patties, about 1/2 inch thick.  Grill, broil or cook in a large frying pan (my #1 choice) about 4 minutes per side.  The burgers should be cooked all the way through, but do not overcook.