I picked up my second CSA farm box from Sun Gold Farms this weekend and my fridge is once again overflowing with produce. In this box: A huge head of leaf lettuce, a big cabbage, fava beans, sugar snap peas, curly kale, parsley, five zucchini, spring onions and a basil plant. I used almost all of last week’s produce but still have a partial cabbage and some mint, plus some broccoli that I picked up somewhere. I also bought blueberries and tomatoes at the market. Obviously there is plenty of salad on the menu this week, plus some broccoli and spring onion soup and probably some slaw and at least one other thing involving cabbage. But yesterday, it was all about the smoothies.

Yesterday I was having some issues. Issues with being a total klutz, to be exact. Every time I turned around I was knocking something over or dropping something or running into something. You would think smoothie making would be a pretty safe choice, since chopping and/or major cooking could lead to disaster on days like this. So I threw everything in the blender, and pressed go while I scrambled a couple eggs to go with it. As I’m beating the eggs, I noticed that as the blender is blending, it’s sort of traveling along the counter top with the vibration, and out of the corner of my eye I see it start to tip off the counter. In a flying leap I lunged over there and caught the floor-bound blender (as it’s still blending) one-handed (!) and as I’m setting it safely back on the counter I bumped the bowl of scrambled eggs and further scrambled them as they fell to the floor, splattering everywhere. I turned off the blender (yay, me!), cleaned up eggs, rescrambled, cooked eggs, and then poured my smoothie into glasses, dribbling a bit down the sides, but happy with the consistency, which was no doubt improved by its brief flight. I don’t recommend trying any of that at home.

If you don’t like to cook your greens, and you’re sick of eating salad, stuff those greens into a smoothie and drink them instead. You can change up the recipe to your liking depending on what fruit you have available, but I find the berries usually mask the taste of the greens, some stone fruit or banana adds sweetness and adding some herbs or citrus adds a bit of brightness as well. My kids love these and never complain about the bits of greenery I add to them. With some of the more hardy greens, be sure to have plenty of liquid and blend a little longer than usual. If you have a wimpy blender I’d probably go with spinach instead of kale since it liquifies much easier. I usually freeze all the fruit, but if your fruit is not frozen, add some ice cubes to give it that smoothie texture. 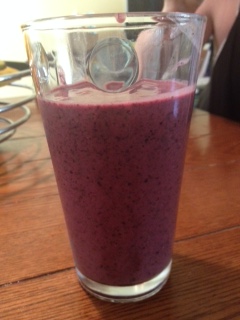 2 big leaves of kale, ribs removed
1-2 cups blueberries, frozen
2 nectarines (fresh or frozen)
Mint – a couple of sprigs, stems removed
1 big scoop of plain yogurt
A few ice cubes if you want it extra cold or if your fruit isn’t frozen
1-2 cups sparkling water, juice, coconut water, regular water or milk (I like the sparkling water because it makes it just a tiny bit fizzy!)

Blend everything together thoroughly. Kale is a pretty hardy green, so I usually add some extra liquid and let it blend a long time to really pulverize it so I’m not chewing my smoothie, because nobody loves that. Add a little more liquid if needed to make it a drinkable consistency. Pour into glasses and enjoy while it’s cold. This made enough for 2-3 servings.