Summer has officially come to an end, but tomatoes are still coming off the vines and making their way into my kitchen.  Thanks to gifts from my mom and my aunt, I had a huge pile of tomatoes that needed to be used right away.  I decided to take a cue from my friend Valerie and cook these babies down into spaghetti sauce.

I have no idea what kind of tomatoes these were; there were several different varieties.  I started with a huge bowl, I would guess at least three or four pounds of tomatoes total and was hoping to end up with enough sauce for a couple of dinners. Alas…it only made enough for one amazing batch because it was so good we all had to have another helping!  Turns out tomatoes reduce in volume quite a bit when you cook them for an hour or two.

Seriously some of the best spaghetti I have ever made.

Bring a pot of water to a boil.  Score the bottom of each tomato with a knife.  Put the tomatoes in the pot of water (you may have to do this in two or three batches).  Cook for 1 minute until skin starts to peel.  Remove tomatoes and rinse with cool water, or submerge in a bowl of cool water.  When cool enough to handle, remove skin and stems.  Cut into large chunks and put in a large pot (I used the same one I used for blanching the tomatoes). 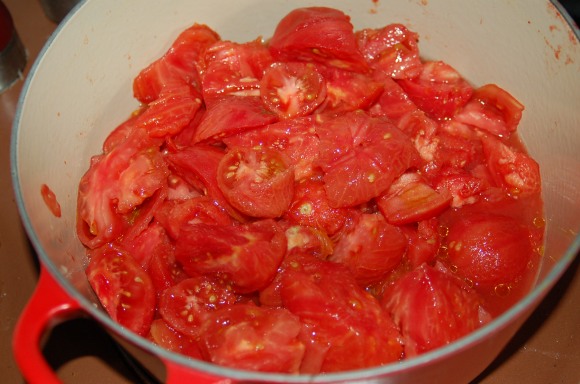 Tomatoes all ready to fulfill their destiny.

Add onion, garlic, Italian seasoning, olive oil and water.  Bring to a boil and then reduce heat to medium or medium low.  Simmer uncovered for 1-2 hours, stirring occasionally, until tomatoes have reduced down and sauce has thickened to the consistency you like.  In a separate skillet, cook Italian sausage.  Add to sauce.  Let it cook and mingle with the tomatoes for 15-20 minutes.  Taste for seasoning and add salt & pepper as needed.  I added about two teaspoons of salt and a teaspoon of pepper to mine.  Do not add salt until after you add the sausage and taste the sauce, since most sausage has some salt in it already. 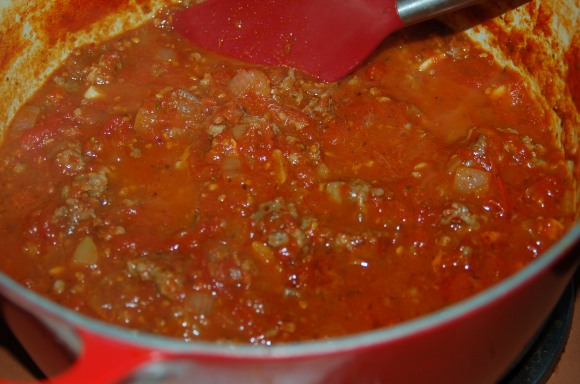 Amazing Spaghetti Sauce. Ready to mingle with some pasta.  You can see on the sides of the pan how much the sauce has cooked down.  Yummy concentrated flavor.

Cook pasta until tender.  Drain and smother with sauce.  Prepare yourself for many yummy noises.