Out of all of the things I love in this world, potatoes easily make my top 10.  Some might say that’s a sad state of affairs, but personally, I think it’s great that something so small can make me so happy.  For me, they are more than a comfort food.  They are delicious, but they are also a cure-all.  Morning sickness?  Eat hash browns.  Hangover?  Eat hash browns!  Bad day?  You guessed it.  Get out the shredder.

Potatoes get a bad rap for being unhealthy, but I think it’s unjustified.  True, they are high in carbohydrates and low in protein, but they are also loaded with vitamins, minerals and fiber, especially if you eat the skin.  The unhealthy part is mostly in how they are prepared – deep fried, or smothered in butter and sour cream.  I say just eat them in moderation, and with a little protein to balance the carbs.

I’ve tested hash browns at breakfast places across the country, and though I’ve enjoyed most of them, I have formed definite opinions about how I like them best.  Shreds.  Golden brown.  Crispy on the outside, soft on the inside.  Butter.  Hot sauce.

To cook these right (and by “right” I mean the way I like them), there are some hard and fast rules that CANNOT be broken:

1. Squeeze out the potato juice (there is a lot more than you think!)
2. ONLY FLIP ONCE!
3. Use butter.   They will not taste the same or cook up the same in oil or margarine.  Butter! 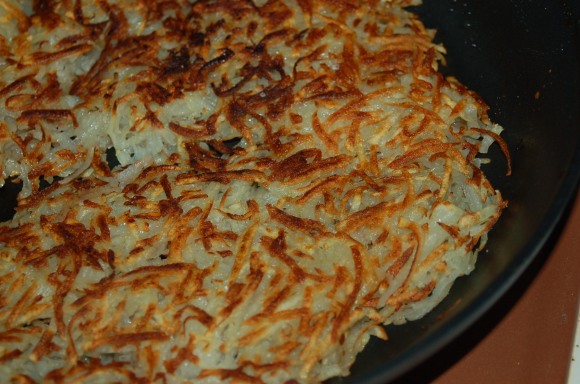 Heat a large skillet over medium high heat.  While it’s heating, squeeze out the liquid in the potato shreds.  You can wrap them in a towel and twist or just pick up handfuls and squeeze them over the sink.  You’ll be amazed at how much potato juice comes out!  When your pan is hot, add butter.  Melt and swirl around pan to coat the whole bottom.  Add potato shreds and spread out.  Sprinkle with a pinch each of salt, pepper, garlic powder and paprika. Turn down heat to a little below medium and cover. 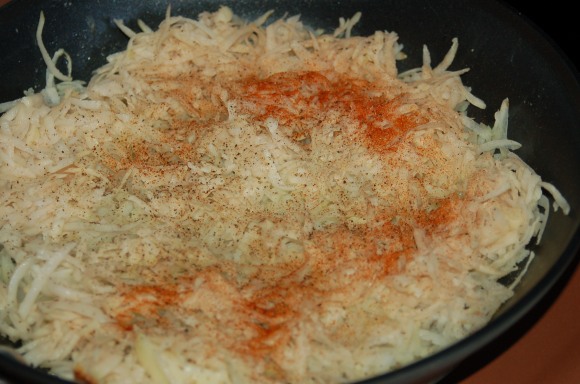 Making Hash Browns. Spread out in the pan and sprinkle with spices. Cover.

Cook for 15-20 minutes.  Maybe this sounds weird, but I usually don’t time them, I just know they are ready to flip when they smell done.  Raw potatoes have a smell, and yummy cooked potatoes have a really good smell.  When they are smelling like you want to eat them, it’s usually time to flip.  Until you have the smell test down, just check them every few minutes.  When they are ready, they should be brown on the bottom, and if you taste a bite, it should be cooked, not raw.  By now it’s set up like a pancake, so slip your spatula underneath and flip the whole thing.  If you’re not feeling brave, you can break it into a few sections and flip that way.  At this point I usually slide a couple of slivers of butter under the edges in a couple of places just to help the other side brown up.  Leave uncovered, sprinkle that side with a little salt, and cook for about 5 minutes more.  Cut and serve.  I like to drizzle a little hot sauce on top, and serve with a couple of eggs. 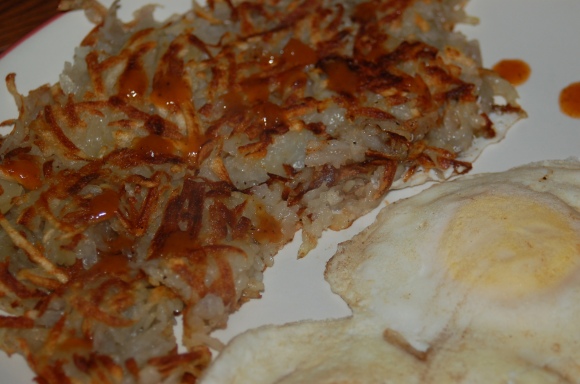